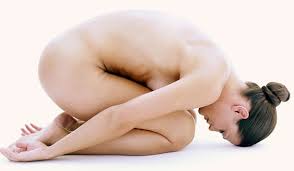 Sometimes you have to step outside of your comfort zone to evolve into the person you want to be instead of the person you are. The fact is this process is seldom fun and often painful. But it is absolutely necessary for growth.

This is the story of one of those moments for me.

It was early in my fitness/wellness career. I was fresh out of yoga school and I had talked my way into a job at a high end resort spa. But if the truth be known I was vastly under qualified for the job.

I began having a re-occurring nightmare where I’m late for work. I drive through town at break neck speeds almost mowing down little old ladies and women with strollers along the way. When I finally get there the class is full. I introduce myself and quickly lay out my mat, only to realize I have neglected to get dressed. There I stand naked in front of the world.

One day after teaching yoga, a student from the class approached me. She said that she had really enjoyed the class and that she worked for an all-inclusive hotel chain in the Caribbean. This chain liked to bring in guest yoga instructors and they would pay for all expenses all you had to do was teach two classes a day. Sounded like a great deal to me; they would assign me to one of several resorts with varying themes like sports-oriented, high-end luxury, or their non-stop party location. A few days later I signed a contract stating that I would teach whatever, whenever, wherever in exchange for a one-week free vacation.

Three weeks later I was on a plane headed for the Caribbean. I arrived at the party hotel, unpacked and headed for the manager’s office where I was told I would get my schedule for the week. The manager was super busy but he welcomed me warmly and handed me my schedule, assuring me that his assistant would answer any questions I might have. She gave me a tour of the lush, tropical resort, explaining to me that the resort was divided in half. One side was the nude side and the other side was the prude side. “Your 7 am class tomorrow morning is “Nude Yoga on the Beach” and your 5pm class is “Sunset Yoga on the Prude Terrace.”

I stood there in shock. Nude yoga on the beach? She asked me if I had any questions, but all I could think of was that I had signed a contract to teach whatever, whenever, wherever they wanted me to. They’d flown me all the way down there from L.A. to the Caribbean– what the hell was I supposed to do? Nope, no questions, ma-am.

I didn’t sleep a wink that night–all I could think of was that my nightmares were coming true. At 7am I wrapped a towel around my naked body, grabbed my yoga mat and headed down to the nude beach. There on the sand, assembled on towels and yoga mats were 40 people patiently waiting, the class was a mix of both men and women and all of them were naked as the day they were born. I strode confidently to the head of the class… OK maybe not that confidently, laid out my yoga mat, ripped off my towel and in all of my naked glory introduced myself and started class. The participants ranged in age from early twenties to late sixties and honestly, it was a tough class to teach. There were students with lots of different fitness levels, the sand made balance postures tough, and there was the difficulty of analyzing body alignment while trying really hard not to “look” at bodies. I was a little freaked out about touching people to help them with their poses, even in places I would have been fine touching them clothed. Somehow it all seemed weird in this setting, because dammit, I was naked!

But I made it through class without any major embarrassing incidents. At the end of class several people came up and told me how much they had enjoyed the class. A nice woman in her late fifties with big blue eyes and huge boobs asked me “Are you a nudist?” I politely said no, to which she replied, “Well I really appreciate you respecting our lifestyle. My husband and I come down here three or four times a year and we always enjoy the yoga classes. But you’re the first teacher that ever taught the class naked!”

After the shock wore off, I realized that I had just lived through my “nightmare,” and while it had been challenging, I had made it through. Every class I taught after that seemed, well….easy. And when I was faced with a situation that was tough, my mantra became “Well, at least I don’t have to do this naked!” Not surprisingly the nightmares disappeared after that and yoga became my specialty. The resort was so impressed that I began to fly to the Caribbean on a regular basis moving from property to property to teach. As the popularity of yoga grew I was contacted by other companies to teach at their resorts and on cruise ships and was blessed with the opportunity to travel the world and teach yoga. Now I never taught nude yoga again, but somehow knowing that I could made me a far better teacher